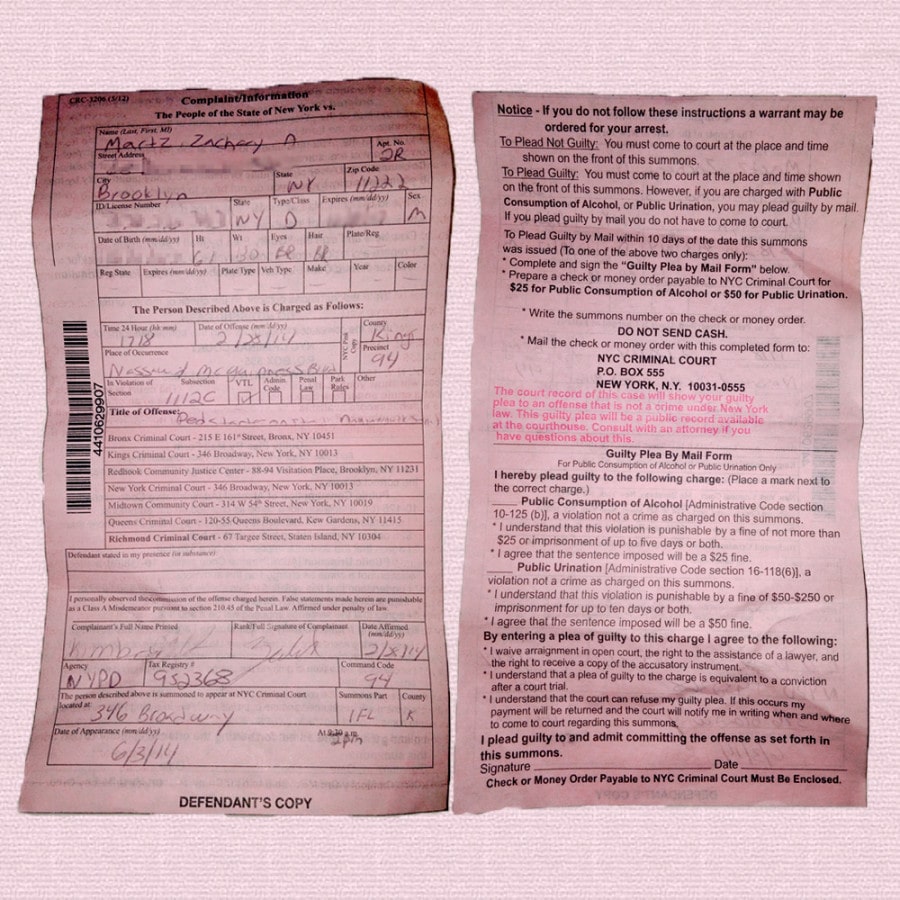 On Friday, February 28th, I crossed the intersection on Nassau Avenue and McGuinness Boulevard on my way back from work (Greenpoint Brooklyn, 11222). I walked about two blocks, was stopped by a police car, and asked to step over to the car. Once car side, the officer asked for my license, to which I inquired the reason behind this seemingly random request. To my surprise I was charged with Jaywalking. I literally responded with a Gasp and a Chuckle. In New York City, where Jaywalking is artform and a way of life, I was flabbergasted at the very notion this occurrence was even cosmically possible.

While I waited to have my information processed, on the street and in the cold for 20 minutes, I chatted with a local realtor whose parked car was blocked in by this silly incident. The officer explained there had been a brief campaign at the intersection where officers handed out flyers informing the locals of the elevated enforcement. Both the realtor and myself, who walk across the intersection two or more times a day, never witnessed this gesture of “goodwill”. After all was said and done, I asked the officers if it would be possible to post signs or have more effective ways of educating the community of the elevated enforcement… I was offered a canned answer and directed to call the precinct.

I walked the last block to my apartment and started to read the back of what I assumed was a “ticket”. However what I quickly realized, this was not the harmless “your parking meter ran out 10 minutes ago” and you send in the fine, I was given a “Pink Summons”. A “Pink Summons” is an official document given by an officer of the law to those who have committed some sort of illegal act that does not require an initial arrest, but does require an appearance before a judge. In some cases a “Pink Summons” can be payable via a mailed check. However this only applies to “Public Consumption of Alcohol”, a $25 dollar fine, and “Public Urination” a $50-$250 fine that you can settle for $50 (no online payments). Basically if I would have pissed on the street or had a beer in my hands on the street, I could pay no more than $50, but because I was charged with such an innocuous misdemeanor I have to go through the same process of say… an aggressive driver or someone who gets into a small bar scuffle.

The situation gets worse. My summons date is set for June 3th, 2014, a full three months from the date I was stopped. If I fail to remember the date and do not show, I will have a warrant out for my arrest. I decided to research my options a bit further and found no light at the end of the tunnel. According to several “Pink Summons” lawyers, I can pay to have a lawyer show up to court as my representative, at which time I would pay the lawyer a flat rate, on average of $300. This does not include any fine that the judge most likely will issue. Jaywalking fines can range anywhere between $50 to $250 dollars and thus I could shell out upwards of $550 dollars between the lawyer and any court issued fine. My other option is to appear on the date of the summons to court and pleaded my case or admit my supposed guilt. I could get lucky and the officer from the precinct will not show up and the charges will be dismissed, but more often than not a precinct representative will be there in place of the officer. It is also possible on the date of my summons I arrive and will have another date assigned to appear before a court of criminal justice.

With all considerations accounted for, my option with highest probability of dismissal, and the most frugal approach appears to be showing up at the court of criminal justice myself. This has been one of the most stressful situations to research and process in general. There is hardly any information on this misdemeanor available online and there is no easy way to reconcile the issue. I would prefer to get this out of the way and save myself, the court, the officers, and the state a sizable amount of time and money; but apparently there is no standard amount to charge nor a 21st century way to pay a “Pink Summons”.

I believe this is one of the typical acts someone with newly founded power use to show authority, often under the guise of something pure like “public safety”. However, the more glaring issues appear to be dangerous intersections, archaic justice processes, and a general lack in understanding the public. If I am going to have my money taken and the problem not solved at least allow me to throw a couple more dollars on my credit card and “donate” to another NYC improvement project.

UPDATE (MANHATTAN):
I went to court about 30 minutes early, I could have been there only 15 minutes early and would have still been fine. If you get there early you have to wait outside the courtroom in the courthouse hallway… with no benches… sitting on cold marble floor if you choose. 15 minutes before the court start time you are let in a room to sit again, this time with benches.

Note: No Cellphones, No Talking when the Judge is on the stand – Don’t be and Idiot and delay everyone else’s day. It astounds me how many people the cops had to yell at and kick-out of the room.

After any continuing case from the day before are called and any cases with attorneys present, they then summon you by what I assume is check-in order… but it’s not really clear. You approach the stand alongside a public defendant who is there to “help” you and get your sentence or dismissal. My Pink Summons was dismissed in less then 10 minutes, but I consider myself a bit lucky.

Total time spent with travel and waiting 2 to 3 hours.